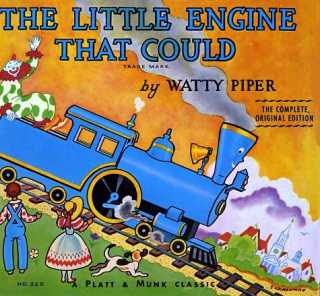 Harry is one of our unit managers. His normally calm, diplomatic voice takes on a sudden energy as he leans across the table and says, “People seem to think that any mission will do. That’s just not true.”

Harry has a point. Missions have to resonate with the team or they will not motivate them. I have worked for a passionate leader and I really felt the difference. When he announced his vision for the company, he made sure we all knew where we could make a difference. We worked together and supported each other. There was a well defined goal that was just beyond our reach.

Those are all good things, but, as I look back on that experience now, I see it differently. It was not the goal that motivated us, but the story of The Little Company That Could. We saw ourselves as a small Canadian company competing for recognition with our much larger colleagues south of the border. It was the classic David and Goliath story, and we were determined to create a happy ending.

My current company’s story is very much in my mind as I put together the book that will become the blueprint for our company’s 2009 year. People don’t traditionally look to budgets for inspiration, but I am out to change all that. Here’s what I’m planning:

There was an excellent demonstration of the power of a story in Drew McLellan’s Marketing Minute today. It certainly inspired me.

The public may not be on the edge of their seats when this book is released, but I’m hoping that Harry will be.