Are You a Sensei (Teacher)?

Bill Kennedy Posted on April 6, 2008 Posted in Training No Comments 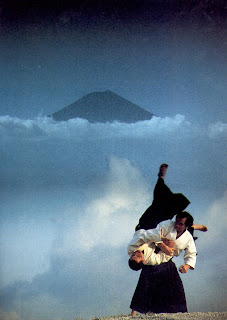 In Aikido, the teacher is referred to as “Sensei” meaning literally, one who has gone before.

When he was 10, my son used to be quite good at Judo. Now that he’s 15, we have been encouraging him to go back to it for physical fitness. We weren’t getting anywhere, until my wife suggested that we all do it together as a family. So we signed up for Aikido (the choice being between Aikido and Kendo and I didn’t feel like getting hit with a stick) at the Japanese Canadian Cultural Centre. That is how I met Sensei Jim.

There we were, dressed in sweats in a room full of people outfitted in martial arts uniforms, made to stand at the front of the class, feeling something like a new member in the accounting department (ah, you see where I am going with this!) Anyway, as I was busy feeling like I’m too old for this kind of thing, and mixing up my left and right (although I must say that there is a satisfaction in throwing and being thrown by your son), I got a chance to observe Sensei Jim.

First, Jim led the class through some basic warm ups and stretches. Then he told the class to do a standard exercise and took us newbies (my son’s term) aside and started us on rolls. As soon as he saw that we were getting it, he asked one of the other students to work with us while he taught the main class. Every ten minutes or so, he checked back looking not just at our form, but also helping the student leader with his / her teaching. In that way, he was able to teach the whole class, despite the radically different abilities of the students. At the same time he was able to improve the teaching skills of his better students. Finally, everyone received Jim’s personal attention at some time during the lesson.

At that first class, I learned more than how to fall without hurting myself. It reminded me that I tend to jump in and fix things when I should really use the opportunity to teach my staff. I also tend to intervene personally when I could have delegated the task to someone who could use the opportunity to learn how to be a teacher.

How do you welcome new members to your team? How do you ensure they learn the skills they need? How do you help your team members become team leaders?