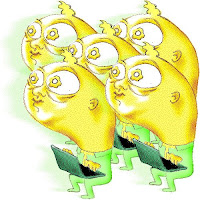 When you see a new version of your accounting software, does it feel like Christmas or April Fool’s Day? Is your mood one of happy expectation or is your cynical side just waiting for disappointment?

Here’s what I saw in a recent demonstration of a new software version to existing, knowledgeable users: negativity. The conversation was dominated with worries about retraining existing users on the new interface. I’m not saying that the people were wrong to focus on this point. It is a valid planning concern. I’m saying the people were wrong to let that issue dominate. Note it and move on! Accounting packages are complex. Learn as much from the demo as you can.

The guy beside me was more philosophical. “Yes, the new interface is different, but we have the option of implementing the new version with the old interface and converting the users gradually.”

To me, lifelong learning does not consist of just taking the odd course or keeping up with your professional development units. It’s more a matter of approaching every new experience as an opportunity to learn. You need to treat your knowledge like a plant that will whither unless it is tended to and nourished.

In addtion, knowledge is getting increasingly transient. What was cutting edge two years ago became generally accepted last year and is getting close to obsolete now. In my youth, I was quite the DOS jockey. Now, people don’t even know what it stands for (Disk Operating System). As an aside, one of my pivotal career choices was what to specialize in after getting my Chartered Accountant designation. I was torn between tax and computers. I ended up rejecting tax because of how quickly the rules change and become obsolete. Looking back on it, I was lucky: I made the right decision for me, but for the wrong reason.

Here’s a little practical advice: there will always be a gap between what the users want and what the software delivers. Don’t stress about it. Write it down and strategize. Maybe the expectations can be dampened or delayed a little. Maybe some small changes can be made to the software. Maybe there are some imaginative work arounds for the problem. And maybe the issue will not seem so critical after the users have worked with the system for several months. In all of the system conversions I have done, there was something that the users liked better in their old system than in the new. After all there had to be some reason why they stuck with the old one for so long!